Who are Ontario’s Young Carers?

A young carer is a child, youth or young adult that provides physical, medical, emotional or other supports to a parent, grandparent or sibling. While most young carers are between the ages of 8 and 24 years old, we know kids as young as 5 years old are in a caregiving role. Ontario has an estimated 3.3 million family caregivers — 17% are young carers between the ages of 15 and 24. There are many more left out of the statistics, as there is no data for young caregivers under the age of 15.

Young carers often grow up quickly, and lose their childhoods too early. They can experience feelings of anger, isolation, loneliness and grief—some suffer from depression or anxiety. Their school and work can suffer because of their added responsibility and they often have limited time to socialize or do extracurricular activities. On the flip side, many young carers are wise beyond their years. Their added responsibilities help build self-esteem, compassion, resiliency and independence, and they learn many important life lessons.

Although awareness of family caregivers is gaining momentum in Ontario and beyond, young carers are often an invisible population of caregivers.

Hidden: The Voices of Young Carers 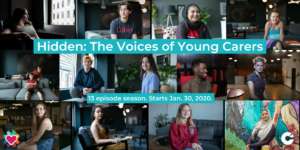 By telling the stories of young carers across Ontario, we hope to shine a light on this often hidden group of caregivers.

In Hidden: The Voices of Young Carers, we invite you to meet 13 strong, powerful and outspoken young carers who, through their stories, are helping others and raising the profile of young carers.

Beginning January 30, 2020 for #YoungCarersAwarenessDay and subsequently for 12 weeks afterward until April 23, we will be launching a new podcast episode every Thursday.

Listen to the podcast series. 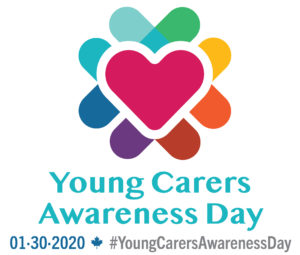 Young Carers Awareness Day is celebrated in the UK. Since 2018, we have been recognizing this awareness day in Ontario. Join us on Twitter (@TheChangeFdn) using #YoungCarersAwarenessDay or #YCAD to join the conversation. 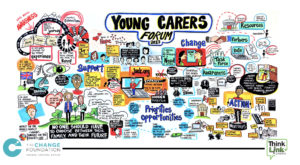 In November 2017, The Change Foundation hosted Ontario’s first Young Carers Forum – bringing together 20 young carers and over 60 professionals, policy makers and researchers to talk about priority actions needed to support young carers in the important role they play in health care, in society and at home.

In the Summer of 2017, the Change Foundation undertook the research for an inventory of organizations, programs and services across the Ontario that support young carers. This inventory profiles the organizations that provide much needed support and respite for this often invisible population of caregivers.

Meet Abbigail. In many ways, she’s a typical 14-year old. She loves to draw and look at stars and planets with her telescope. She’s also a young carer. This is her story:

In 2019, Abbigail was featured in the CBC Red Button series where she shared her experience as a caregiver for her twin brother. Watch the series.

Hot Talks on Health, A Spotlight on Young Carers

On November 20, 2017 we hosted our second Hot Talks on Health event focused on family caregivers. The event shined an important light on the often invisible population of young carers.

Six young voices on what it’s like to be a kid and care for family – Olivia, Hope, Joel, Abbigail, Josh, Kendra. These six young people have all found themselves in a caregiving role at a young age.

Listen to the stories. 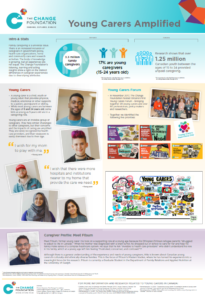 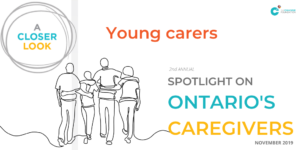 Meet the 13 #youngcarers who are featured in our #podcast series Hidden: The Voices of Young Carers. You can tune into all episodes on all podcast platforms or access the episodes here: bit.ly/36yRH4F pic.twitter.com/F2hEt4Ix5i

Do you have 20 minutes to start our #eLearning series? By doing so you will take the first step in learning how you can change your practice to help improve the experience of family #caregivers through practical tips and examples. Register here: bit.ly/2U1Mlcs pic.twitter.com/CNhlK8Z8PC